Colon And Rectum Cancer: An Overview

Cancers are growth abnormalities that get out of hand. When cells begin to multiply in abnormal numbers and start taking over the tissues, they begin forming groups of cells that get bigger and expand at alarming rates. The clumps formed are called tumors which can be either malignant or benign. Malignant tumors are cancerous and often go through a process called metastasis, that is, they spread through to other parts of the body and affect their functioning as well. Benign tumors are not cancerous, they are less harmful. Even if a cancer has metastasized to different parts of the body, they are named after their point of origin. Cancers that form in the colon and rectum are known collectively as colorectal cancers.

A cancer that originates at the far end of the digestive system, specifically in the colon and rectum is called colorectal. The situations and features of both cancers are almost identical, but treatments vary. The colon is a part of the large intestine and is about 5 feet long, it is at this place that water and nutrients are absorbed and used in the body, it is here that the waste is stored. The wastes are then pushed into the rectum, the last six inches of the tract and out through the anus. The first stage in the colorectal cancers is the growth of polyps, they are small growths that grow from the inner wall towards the center.

There are two types of cancers that can grow in the colon and rectum, the polyps can grow in two ways as adenomas and adenocarcinomas.

Adenocarcinomas: Over 95% of all colorectal cancers are of this type and they grow out of gland cells that are found on the inner wall of both the colon and rectum.

Both of them can be easily avoided by removing them early on when they are polyps.

American Cancer society has estimated that in the year 2105, there will be a little over 93,000 new cases of colon cancer. Rectal cancer will affect more than 39,600 people. As far as deaths go, nearly 50,000 colorectal cancer caused deaths are expected. Apart from skin cancers, colorectal cancer is the number three occurring cancer in the USA. The cancer seems to affect both men and women almost equally. The lifetime risk of developing colon cancer for an American is about 1 in 20. 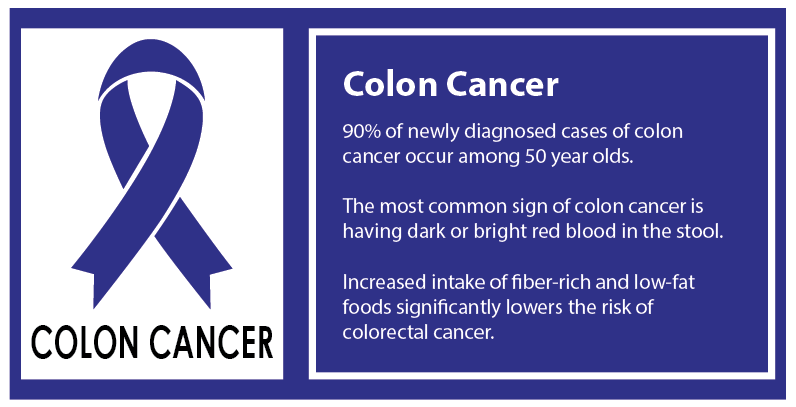 Colorectal Cancer - What You Need to Know

For both men and women, colorectal cancer is the third deadliest cancer there is. This is why it's so important to get screened for it. As with all cancers, the earlier it's found, the easier it is to fight off. So you need to know what to look for and what doctors do to screen for colorectal cancer. Here are the common signs and symptoms of colorectal cancer and the screening methods used to determine if you have it.

Signs and Symptoms of Colorectal Cancer

If you have any of these symptoms you should see your doctor.

* Constipation, diarrhea, or any change to the stool that lasts for more than a few days
* Rectal bleeding or blood in the stool
* Feeling like you have to have a bowel movement, but when you do go you are not feeling relieved
* Abdominal pain or cramping that is persistent. Gas or pain of any kind that doesn't go away
* Weakness and fatigue
* Weight loss when you weren't trying to lose weight

These symptoms can generally be explained away as other things such as a virus, infection, hemorrhoids, and inflammatory bowel disease. It's important to see your doctor if these issues persist so these things can be ruled out.

There are often no early symptoms of colorectal cancer. Signs and symptoms may vary when it develops depending on where in the colon the cancer is located. You should be more concerned if you are over the age of 50 or have a family history.

If you present with any of the above symptoms, then your doctor will take a complete family history. He or she will feel your belly to see if he feels any masses. He might order some blood tests to see what exactly is going on, like a CBC (Complete Blood Count) to check for anemia, liver enzymes to check your liver function because colorectal cancer can spread to your liver, and tumor markers in someone who already has colorectal cancer or has had it.

If symptoms or the results of these tests suggests cancer, then further testing is recommended. This is usually a colonoscopy, but sometimes a sigmoidoscopy or an imaging test that uses a barium enema and a lower GI series. This helps doctors screen for polyps.

During a colonoscopy, if colorectal cancer is suspected the doctor will take a biopsy which is just a small piece of tissue that is removed for further examination under the microscope. In very rare cases, part of the colon may need to be surgically removed (a part less often used) to make the diagnosis.

Additionally, scans such as a CT scan might be performed. This is used more often to see if colon cancer has spread to other organs like the liver. It gives a detailed image of the soft tissues of the body.

An ultrasound might be performed to try to see tumors, but really all this would show is tumors in the liver, gallbladder, or pancreas. It cannot detect tumors in the colon. For that your doctor might recommend an endorectal ultrasound where a special transducer is inserted into the rectum. This way the doctor can see deep into the rectal wall to see where the cancer has spread, if at all, and it can look at the lymph nodes and nearby organs.

If you don't have any symptoms of colorectal cancer but are of a certain age or have a family history, there are screening tests that can be done. Tests that find both colorectal polyps and cancer are perfect. This way if polyps are found they can be removed during the screening to help prevent them from turning into cancer. For less invasive screening, tests that check the stool can be used. However, this doesn't find polyps.

To screen just for cancer, tests like the Fecal Occult Blood test is used. Fecal matter is screened for the occult blood which cannot be seen with the naked eye. If there is blood in the stool, a colonoscopy would need to be performed to determine where exactly the bleeding is coming from.

Check with your doctor to see what he recommends based on your symptoms or lack thereof and your family history. While colorectal cancer is the third leading deadly cancer, the development of tests and screenings has been increasing the survival rate.